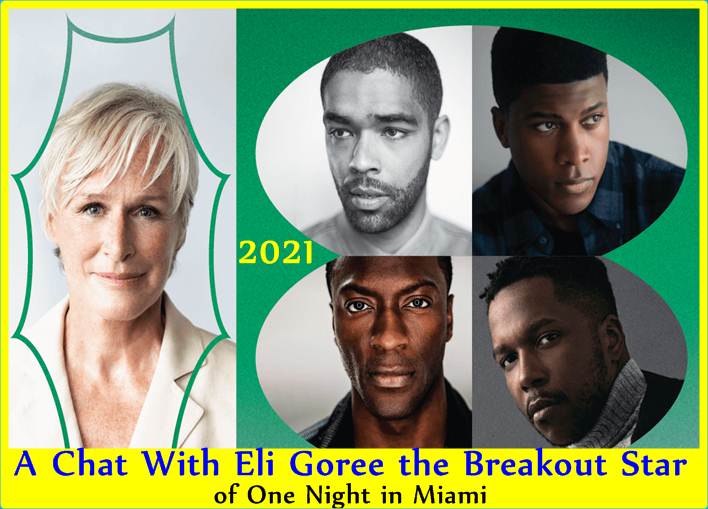 A Chat With Eli Goree, the Breakout Star of One Night in Miami

Halifax-born actor Eli Goree has appeared in hit shows like The 100, GLOW, Ballers and Riverdale but his latest project is undeniably his big breakout moment. Starring as Cassius Clay (later known as Muhammad Ali) in Regina King’s feature directorial debut, One Night in Miami, Goree delivers a knockout performance, bringing both a swagger and a vulnerability to his portrayal of the boxing champion.

The film, which premiered at the 2020 Toronto International Film Festival, takes place largely over the course of one night in 1964, following Clay’s famous defeat of Sonny Liston to take home the title of World Heavyweight Champion in Miami. Based on a play, the film depicts the reunion that night of Clay with three other American icons: activist Malcolm X, athlete Jim Brown and singer Sam Cooke, all of whom were close friends in real life.

Larger-than-life public figures though they might be, the film humanizes them by imagining the private conversations about racial justice, duty and Black empowerment that may have taken place between them amid the political and social turmoil of the ’60s.

5 Brands That Prove Artisanal Is The Future of Fashion

Goree, who had auditioned years earlier to play Clay in a different film that never got made, says he never let go of his dream to play the boxer on screen one day. “I said ‘I’m going to keep working on this because at some point there will be another opportunity to play Cassius and I want to be prepared,” he tells FASHION over the phone. So he continued training with boxing coaches as well as dialect coaches, and when the opportunity came just a couple of years later, he was ready.

“I got in to see Regina on my second audition and felt more than prepared from all those years of training. And then she took it to another level with her expertise and her ability to make things very human and not make them just a performance or just an imitation. ”

Watch the One Night in Miami trailer below and read on for our interview with Eli Goree.

The Sweatsuit Was the Undeniable Fashion It Item of 2020

Muhammad Ali is such an iconic figure and cultural icon. What did you love the most about playing him?

People for years have told me I look like a young Cassius Clay. Obviously he’s someone that had a huge impact not just on the Black community but on the world in general. He was a magnanimous figure who spoke his mind, who was fearless and uncensored, and not afraid to stand up for what he believed and pay the consequences for what he believed if necessary.

I think there’s a lot to take from his experience and his example in terms of how to be unapologetically bold and confident yet at the same time humble and loving and gracious to others who don’t have the same opportunities. He really was a unique person in history and he touched so many lives. I’m glad this film was just about one night because you can’t really capture his whole life in a two-hour film but you can take one special moment and maybe give some insight into that moment and that’s really what this film did well.

What was the hardest thing to nail about him?

It was a challenge all around. I had an idea of his rhythm and his cadence, it’s very famous and many people have heard it. He didn’t have a standard American accent, he had a unique and particular accent from Louisville, Kentucky. So Trey Cotton, my dialect coach, was really instrumental in getting the Southern accent done first, and then we put the Ali-isms in the speech.

And the boxing itself—learning how to stay on your toes and the jab movements… There was a lot of training. I put on 20 pounds of muscle. You can never fully emulate someone who was the best ever at what he did but you want to honor and respect it and create a sense of authenticity so when people watch it they don’t get taken out of the story. It was a big undertaking and I really gave it my all.

Not only were you starring with some incredible actors [Leslie Odom Jr, Kingsley Ben-Adir, and Aldis Hodge] but you were being directed by a total legend, Regina King. What was it like working with her?

As much as she’s awarded and acclaimed for her acting, I won’t be surprised if at the end of her career as an artist she’s more remembered for her directing because she’s so meticulous, she’s so gracious, she pays attention to detail, she knows how to communicate with actors and get performances, she knows how to communicate to crews and focus on different things. She’s the real deal. She’s an incredible person.

This movie was set in the ’60s but the conversations about racial equality and justice are just as relevant (and necessary) even today. What do you think about the film’s timing now in 2020, and where it kind of fits into the larger cultural conversation?

As a Black man this movie is really relevant at any point in my life. Now, with social media and camera phones and 24-hour news cycles, a lot of people who haven’t seen these things happening are starting to see these things. When it comes to police brutality and social inequity for African-Americans in regard to the justice system and policing, that’s been a constant throughout American history, throughout Western civilization since slavery.

I do think that right now it’s good to have this film because it really creates a conversation in a public forum amongst Black men that I don’t know that we’ve heard, at least not in this generation. With everything that’s happening politically and socially, it gets at all the different sides of the argument.

You have Sam Cooke, who’s overcoming oppression through economic independence; you have Jim Brown, who’s overcoming oppression through resisting stereotypes; Cassius Clay, by literally fighting and beating up every single person who gets put in front of him to be able to say ‘I’m mentally and physically fit’; and Malcolm X, who says we should be able to determine our own future as a nation of people. I think that this film was made with excellence, with attention to detail and with the truth. So those statements and thoughts and arguments put forth will resonate.

What I like about the film is that it really feels like you’re listening to a conversation between friends. There’s obviously such a specificity to the Black experience but there’s also a universality to it. You can imagine friends of different backgrounds having these conversations.

When you deal with humanity and injustice for a group of people, it ends up being something that can resonate with lots of different people.

With this film, it’s okay and it’s important to say ‘yes it’s about these Black men who are dealing with these issues,’ but you can feel empathy for that and you can relate to that because anyone who’s ever experienced injustice or oppression knows that it’s a feeling they don’t want to go through and knows that that’s something that no group of people should have to endure. It speaks specifically to this issue but it also resonates with people from all different walks of life.

A Chat With Eli Goree, the Breakout Star of One Night in Miami