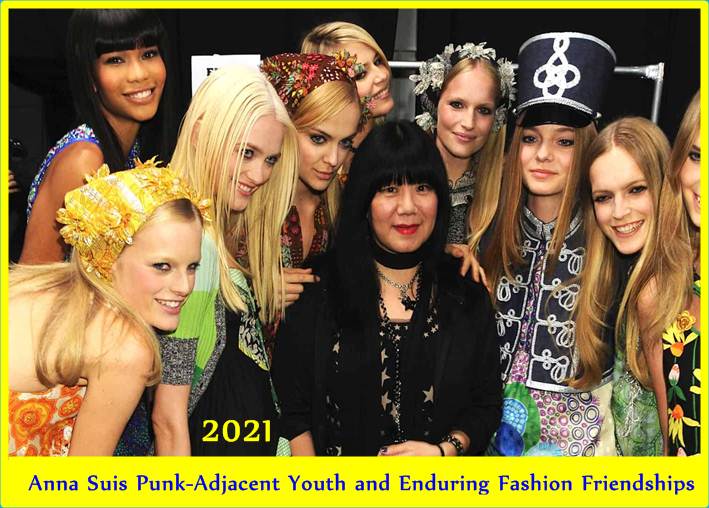 In modern use, the term “Bohemian” is applied to people who live unconventional and usually … The most enduring grisette is Mimi in Henri Murger’s novel (and subsequent … a portrait of her “when she defied the fashion of her youth in one of the beautiful … Snejana Onopka on the runway for Anna Sui in November 2011.

The designer Anna Sui grew up in the Detroit suburbs, dreaming of the rock ’n’ roll scene of the 1960s. As a teenager in the ’70s, she’d tag along with her older brother to catch all-ages shows by the city’s burgeoning icons like Iggy Pop and MC5, but it wasn’t until she arrived in New York as a student at Parsons School of Design and became friends with classmate Steven Meisel that she found herself in the thick of music history.

“When I first started hanging out at CBGB, we would go see Patti Smith and then we’d go to what seemed like a high school gym, and there was Blondie,” Sui recalled. Sui brought that underground sensibility to her designs when she set out on her own in 1981, making a name for herself with grunge-feminine florals and babydoll silhouettes. Ten years later, after seeing Madonna in one of her designs, she built up the confidence to stage her first runway show, which featured Naomi Campbell, Christy Turlington, and Linda Evangelista.

In the early 1990s, SoHo was far from becoming the retail hub it is today. Sui, pictured above at her shop’s opening party in 1992 with Marc Jacobs and Betsey Johnson, was one of the pioneers. “My friends and I put it all together,” she said. “They helped me paint the walls. We made paper-mâché doll heads.”

As a child, Sui was a flower girl at an aunt’s wedding in New York, and was dazzled by the bridal party’s matching shoes and bags. “This is my aha moment, because I came back to Detroit telling my parents I was going to move to New York and become a fashion designer,” Sui said.

“You see how everyone else is caught up in the wedding. I’m dreaming of already.” Her mother and father (above) were hesitant when Sui actually made the move at 18. “They thought I would probably not have the wherewithal, because I was always kind of frivolous and only into shopping. It surprised them, the determination that I had.” Eventually, they came around and attended every runway show. “It got to the point where my dad knew all the journalists.”

Camaraderie was high among several of New York’s designers (from third from left: Isaac Mizrahi, Oscar de la Renta, Todd Oldham, Sui, Donna Karan, Calvin Klein, Michael Kors) in the late ’80s. “There was a group of us who were just kind of starting up—it was not so competitive because it was almost like us against the old guard,” Sui said.

Sui won the CFDA award for new talent in 1992 (pictured here with Evangelista at the ceremony). Moments before being called to retrieve the award, Sui had an unlikely encounter with an icon. “All of a sudden, I heard these heels clicking and running after me. I turned around and it was Barbra Streisand and Donna Karan. Barb was like, ‘Anna, Anna, where can I get your clothes?’ ”

Sui met Madonna (shown here in a Sui dress), another Detroit native who cut her teeth in New York’s ’80s club scene, while styling a Meisel shoot. “I went to the runways in Paris with Steven, and we stopped at the Ritz to pick up Madonna and she had her coat on already,” Sui said. “When she sat down at the Gaultier show, she took off her coat and said, ‘Anna, I have a surprise for you!’ She was wearing my babydoll dress.”

Sui and Meisel met in the Parsons lunchroom, and they’ve stayed close since. “He was the most beautiful guy I had ever seen, and he just had such really cool style,” she said.  In the ’80s, Sui would work all day, take a nap, and then usually head out to meet up with the photographer by 11 p.m. to go to spots like the Mudd Club. Above, Sui with Jean Paul Gaultier, Susanne Bartsch, and Martine Sitbon at a party that same decade.

Sui remains a devoted concert fan, and attended a festival in the ’90s thrown by the Beastie Boys’ Adam Yauch. “Everyone was staying in the same hotel. I was coming down, the elevator doors opened, and there was Dave Navarro,” Sui said. She later approached Navarro, the guitarist for Jane’s Addiction and the Red Hot Chili Peppers, with an invitation to walk her runway (pictured here in the spring ’97 show).

“He came into my studio, and my patternmakers, everybody, was sitting around. He took off his jacket, took off his shirt, took off his pants, and said, ‘You’re the artist, I’m the clay. Mold me as you wish.’ ” His one demand was that he wear some sort of lingerie. Above, Sui takes a bow at her spring ’94 show.

Sui got to know the Ramones when a friend started dating a member. Before she officially started doing shows, Sui designed “a kind of pirate, buccaneer collection.” Joey Ramone and Walter Lure, a member of Johnny Thunders and the Heartbreakers, did an impromptu photoshoot. “We were up on Joey’s rooftop, and we were just goofing around with Polaroids.” Above, Sui with Linda Ramone and friends at the opening night of the “Hey! Ho! Let’s Go: Ramones and the Birth of Punk” exhibit at the Queens Museum in 2016.

In 1991, Sui moved her business out of her apartment and into a proper office in the Garment District, where she continues to produce most of her collections today. The designer is seen here at an early Christmas party with her staff, four of whom still work at the company. “We all kind of grew up together and learned the business together,” Sui said.

Through Meisel, Sui met Evangelista, Naomi Campbell, and Christy Turlington. “My apartment became club central. This is somebody’s birthday party. You can see that Naomi and Christy showed up in right-off-the-runway Versace, and they’re posing with my Greer Lankton Diana Vreeland doll that I have dressed in Courrèges,” Sui said.

The supermodels’ encouragement was part of what inspired Sui to start her own line. “I saw a change in how they were dressing,” she said. “Naomi asked me to take her to the flea market, and she was wearing a vintage top, flared jeans, and wooden clogs. Here were these ladies who could have anything they wanted, and what they wanted was vintage and this grungy look.”

Sui’s taste for clubs faded after the lower Manhattan hot spot Area closed in the late ’80s, but she’s never lost her taste for dressing up—especially when there’s a theme. “I had just renovated my apartment, and this was my first dinner party,” she said of this photo of Marc Jacobs and Sofia Coppola, taken last year. “I told everybody to come wearing caftans and jewelry. Marc’s got the jewelry, and Sofia’s got the caftan.” Jacobs and Sui tend to dress alike, whether or not they plan it: “Sometimes we don’t even talk about it, and Marc and I will show up in the same thing that we just bought from Prada.”

Sui at the 1981 Met Gala, in a look by the late Japanese designer Kenzo Takada. Sui notes that at the time, most of the outfits worn to the Met Gala were actually owned by their wearers. “You saw real people, not just influencers,” she said.

It was at the Mudd Club that Sui would encounter one of her childhood heroes, Anita Pallenberg. “I remember my friend Walter Lure said, ‘Oh, Anna, Anita is here,’ ” Sui said. “I was looking all over the club for her. But of course, where do you meet anybody at a club? In the bathroom. I walk in, and I see this woman with this big fox chubby and hat by the mirror. She turned around and looked at me, and she was like, ‘Oh, you must be Walter’s friend.’  ” Years later, Pallenberg returned to New York to intern for Marc Jacobs at Perry Ellis, and became a Sui confidant.