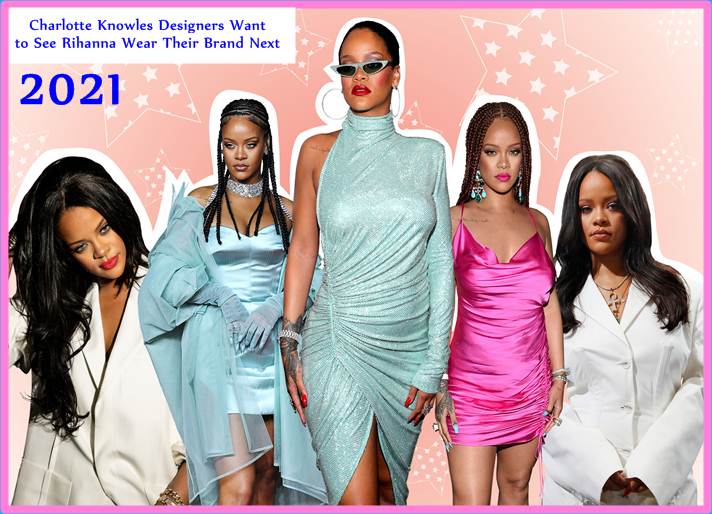 Even if the name Charlotte Knowles isn’t instantly recognizable to you, you’ve probably seen the label’s structured corsets, bodycon tops, and dresses with flashes of revealing cut-outs, or otherwise, its more utilitarian 90s-meets-70s mesh leggings, on everyone from Grimes to Bella Hadid and Kylie Jenner.

When it comes to what the London-based brand represents, femininity is at the top of the list, and Knowles’s pieces often mold to the body, to highlight the female form. When it comes to composing a collection, bodycon dresses in all odd shades of tie-dye and awkward prints are equally as important as elasticised sheer blouses or shearling jackets trimmed in neon green.

Knowles graduated from Central Saint Martins in 2017, and previously interned at Alexander McQueen, Acne Studios, Helmut Lang, and Gareth Pugh. But she began designing at the age of 13, when her mom first bought her a sewing machine. Along with her partner, Alexandre Arsenault, she has steadily built up a brand that celebrates the female gaze and is unafraid to position lingerie-inspired pieces as outerwear.

For spring 2021, Knowles and Arsenault showed a collection full of impactful sheer printed pieces as well as decidedly directional outerwear, inspired by their teenage years spent watching MTV. The duo also collaborated with Harley Weir on a film.

“We kind of became friends, and then never had the budget to be like, okay, let’s work with her and she can do whatever she wants us to do,” explains Knowles. In the video, models turn round and round, the camera inching into zoomed-in portraits of various parts of the body and face, in an almost distorted, psychedelic haze. We caught up with Knowles and Arsenault, who gave their Style Notes interview while working on their upcoming fall 2021 collection.

Why focus on corsetry and underwear-inspired pieces?

Charlotte Knowles: It’s always been kind of core to the brand, stemming from my graduate collection. There’s just this innate intimacy associated with underwear and those sorts of pieces. It was this archaic idea of femininity and privacy and intimacy, and we felt that today, with Instagram and everything, we like to question this idea of intimacy and, what is femininity? How can we take it outside?

How can we take the idea of underwear into something else and use the detail and the language, and turn it into other things? There are always really intricate parts to underwear as well: it’s almost utilitarian because it’s so functional; everything has a function, made for a reason in a really beautiful way.

It’s all the things that we really love—product design, product development. There’s something so peaceful about these kinds of objects. And I think that’s something that Alex and I have always been fascinated with. With underwear and lingerie, there are so many interesting finishings and things that you can explore and evolve into more of a ready-to-wear piece.

You just did jeans for the first time for spring 2021. How else is the brand expanding?

Charlotte Knowles: Every season, we’ve been entering into new things. I think that the brand is so much more than that. Recently we’ve been developing bags and working on some jewelry. I think that we want to expand into outerwear, because we’ve seen a good response with the last few seasons with leathers. And also, more dresses and a bit more of a complete range.

Where do you find inspiration?

Charlotte Knowles: We always find references from all over the place. We spend quite a lot of time researching. I think mainly it’s because we’re two people thinking about it and we live together, do everything together. So it’s a constant discussion of what next season could be. We find one thing and then we’re like, what if next season was like this? It’s a constant discussion of us finding things.

Alexandre Arsenault:  It’s us continuously discussing, finding, and being interested in things and just trying to see different facets [within] the kind of universe that we’re trying to build. It’s never thematic, it’s more how we imagine the universe and that moment in time.

Is there a person or label who has most shaped your sense of design?

Charlotte Knowles: For me, there are a lot of brands from the Nineties that were quite massive which I always got really inspired by. Obviously Prada and also Jean Paul Gaultier, who I feel like is sometimes underrated. There’s just so much crazy Jean Paul Gaultier from that era that I’m obsessed with.

Alexandre Arsenault: I grew up with McQueen because I grew up in Montreal. My perspective on fashion is very much built on forums of nerds obsessing with clothes and construction.

So many celebrities have worn your pieces—who have you been the most excited about?

Charlotte Knowles: Both of us really love Grimes, so that was a big moment for me because I listen to her [music]. What’s nice about Grimes is that she was in touch personally. I feel like the ones that we were the most excited about were always the ones that were actually in touch with personally, where I felt like there was a genuine interest in the brand. Also, Bella just looks really amazing. She really suits the clothes and the style.

Who would you love to see wearing your clothes?  Charlotte Knowles Designers Want to See Rihanna Wear Their Brand Next

Charlotte Knowles: Rihanna. We know that she is interested in the brand and has been buying the clothes for a really long time—almost since the third season. But we’ve never seen her wear anything. It would be quite a moment to see RiRi in full CK.

How would you describe the Charlotte Knowles brand in three words?

Charlotte Knowles: I think “power” is always important. I would say “sexy,” “dangerous,” “power,” “future.” And maybe “subversive” a bit as well. If we do tailoring, there’s always something about it that causes a bit of an edge. There’ll be some weird cut-outs in an unexpected place, just like a slit through the skin.

Do you have a style icon?

Charlotte Knowles: Georgia Pendlebury, our stylist. She’s been with us since the beginning. She just always looks incredible and she just finds the most incredible pieces. She’s quite an inspiring person. If I’m designing something, I’ll always ask myself, hey, would I wear it, and would Georgia wear it?

Alexandre Arsenault:  I envision culture and subcultures around us more than actual style icons. We’re much more inspired by the girl right next to us, or even the girls on Instagram—people who buy our clothes and wear them with things that we wouldn’t expect. And that inspires us much more than, like, looking at Madonna, for example.

What’s your go-to outfit? Do you wear your own pieces?

Charlotte Knowles: I usually wear at least one of the mesh pieces every day. I’m always wearing mesh leggings with a big sweater, but then if we’re going out, which obviously hasn’t happened for a year, I’ll wear a corset. I have quite the collection now.

What piece are you most proud of?

Charlotte Knowles: There are usually one or two pieces every season I’m proud of. There’s this one shearling jacket we did for spring that I really love, which I also wear all the time. We did some corsets for spring 2021 with really tiny boning. They’re quite minimal looking, I just really love them.

What’s the best fashion advice you ever received?

Alexandre Arsenault: The best is the most difficult to actually put in place: don’t compare yourself. Not everyone’s going to be successful at the same time and at the same rates because you don’t know what goes on financially or anything else. Especially when you’re just starting—you feel like there is only space for one brand and like you’re trying to fight for that space. You’re comparing yourself to everyone and getting depressed. You have to understand that everyone has a different path and maybe in three seasons, you’re going to be ahead of that other person. And then in five seasons, she’s going to be ahead. There’s no single path.

What’s your most prized possession? Charlotte Knowles Designers Want to See Rihanna Wear Their Brand Next

What are some past cultural or style moments that really influenced you?

Charlotte Knowles: MTV moments, and musicians that I grew up listening to and watching—anything that you would see in our teen years. That’s obviously what’s informed where we are today. There’s definitely a Nineties trend over the last couple of seasons, which I think we push to a different level.

What was your first major fashion purchase?

Alexandre Arsenault: Either some kind of Hedi Slimane gloves or something stupid that probably cost me like a hundred quid. I probably saved money for like three weeks to get it.

Charlotte Knowles: I got a couple things from Prada. I got this knitted playsuit, which is really amazing. That was probably the first big thing.

What’s next for the brand?

Charlotte Knowles: We’re trying to figure out a structure moving forward, how to expand organically, reach more people. It’s all kind of boring business things because we’re almost at the point where we need to hire someone else because it’s becoming a bit too much to handle. And for other things, we’re just working on fall/winter 2021 and trying to see what the future holds.