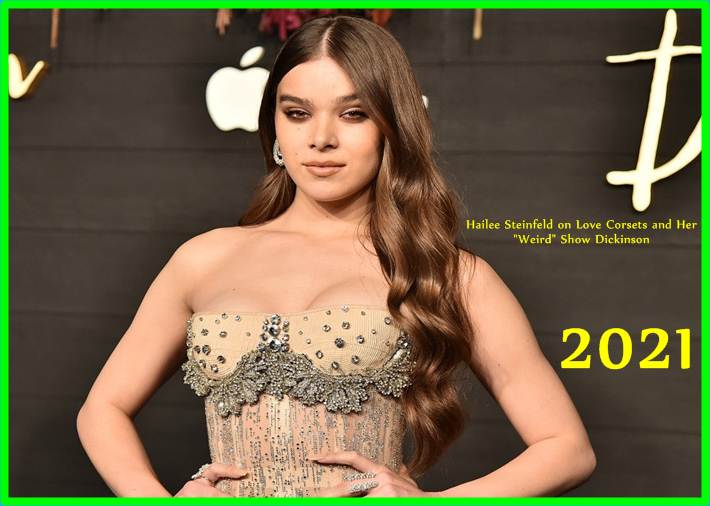 Hailee Steinfeld Dickinson “It’s definitely weird. I’ve called it that quite a few times. But it’s more than that… It feels very honest and truthful.” As someone who has been acting since the age of 12, it’s no wonder that Hailee Steinfeld relates deeply to poet Emily Dickinson who, though from a different era, was also someone who came into her own as an artist from a young age.

The 24-year-old actress (and former FASHION cover star) recalls being “very intrigued” after reading the first two episodes of Dickinson, an Apple TV+ show that debuted last year. When one hears “it’s a show about 19th century poet Emily Dickinson,” that may conjure up a somewhat stuffy picture that’s vastly at odds with the exuberant, eclectic show that it turned out to be. (Just a couple of its absurdities: modern slang and hip-hop music in a period setting, and rapper Wiz Khalifa as Death.)

“I remember reading it and loving it and being very intrigued,” says Steinfeld over the phone. “Alena Smith [the creator and showrunner] just painted this very vivid mental picture of what this show is in those first two episodes and way beyond. It just instantly made sense to me and was something I knew I wanted to be involved in.”

How 5 Creatives Are Managing Their Mental Health

Read on for our interview with Steinfeld about playing an iconic figure like Emily Dickinson, how the costumes served as a metaphor for the constraints women faced during the 1800s, and the “weird” energy of the show, whose second season premieres January 8 on Apple TV+.

The show does such a good job of showing the spirit and energy of this historical figure that we’ve really only ever known through words on a page. What was it like bringing the character to life in such an unexpected way?

With other versions of Emily Dickinson’s story having been told, it was made very clear from the very beginning that what we were doing was not an autobiography. This was taking her poetry and making of it what we imagined might have been her thought process while writing these words. And that sort of opened up this world of endless creativity and freedom to run with.

You read her poetry and for me it always takes a couple of breaks to sort of remotely get what she’s trying to say before I understand it. And that’s the beauty of it. You keep going back. Using that poetry as the driving force of this show was what made it so fun to shoot.  image courtesy of apple

Emily Dickinson is such a strong feminist character, and even though she lived in the 1800s what do you think about her is resonating with people today?

Just the fact that she was faced with so many obstacles as a woman, as an artist, as a young woman, as a human being who simply wanted to be understood. I feel like, you know, as humans we’ll always fight to be heard. We’ve obviously come a very long way thankfully and don’t have to go through what they went through at the time. She existed in a time very different than ours but still faced the same challenges and overcame them ultimately.

What I find interesting is that she kind of kept her art and poetry close and was hesitant to share it with the world. I’m curious whether, as an artist, you understand where she’s coming from?

I do… I do, but one thing that I don’t know and hope I’ll never know is not being allowed to share my work. best I completely understand and can relate to not wanting to or being afraid to or being unsure of the idea but I’ve not been allowed. best I don’t know what I would do or who I would be without my music and my acting and writing and dancing and all of these forms of expression I’ve been able to experience. Again, I hope that’s something I never experience or never know like Emily did.

One word that was used a lot in reviews and online discussions about Season 1 was “weird.” There are so many interesting choices on the show, particularly the language and the music, that give it that weird energy so I’d love to know your thoughts on the irreverent vibe of the show.

I mean, yeah it’s definitely weird. I’ve called it that quite a few times. But it’s more than that. It’s honest behavior that comes from these people. best I think what makes it weird is maybe the fact that it’s in the 1800s or the fact that they’re wearing corsets and the decor is different.

You mentioned corsets so I’d love to take a minute to talk about the costumes and how they helped you get into character.

It feels like an instant sort of line into that time. Putting on those corsets and the 29 petticoats that go with it, I mean it absolutely will transform you, physically, mentally and emotionally. It affects everything from the way you talk to the way you move. It’s a real physical constraint, and the women of that time had no choice but to deal with that. It plays into everything else that Emily is feeling, all of the other constraints mentally and emotionally. And as an actor, it’s kind of a dream to have something like that to get you there.

I’d also love to know about the relationship between Emily and Sue. We know that there’s a romantic relationship there but there’s also deep friendship and mutual admiration. So tell me a bit about playing that, and highlighting what was a pivotal relationship in the real Emily Dickinson’s life.

And it just is a beautiful relationship. The way it evolves in Season 2 is heartbreaking and beautiful and messy and wonderful. It’s all of the things! But it’s a relationship I’m so grateful is such a huge part of the show, because love is love, and it’s about seeing and being seen, and that’s what our show is ultimately about. I love the relationship between Emily and Sue, and it’s been really wonderful playing it out in real life with Ella [Hunt].

What do you think you’ve learned through the process of playing Emily?

I feel as though I’ve learned so much. I mean if Emily was able to get through what she got through in her time, just as far as fighting for what she loves, fighting for what it is that keeps her alive and feeling creative and free in a time where everything and all of that was forbidden, then I definitely can (laughs). I’m so inspired by her and how she was, how we believe her to be, as a human and as an artist. The list really could go on. I just think she’s an incredible human and unbelievably talented. What a cool person she must have been.

Hailee Steinfeld on Love Corsets and Her “Weird” Show Dickinson