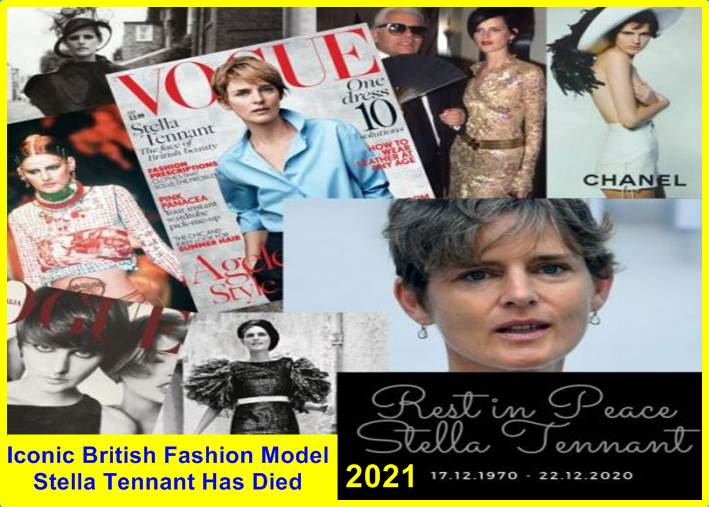 4 days ago”It is with great sadness we announce the sudden death of Stella Tennant on 22 December 2020,” the statement read. “Stella was a wonderful woman and an inspiration to us all. She will be greatly missed.” Tennant was a gifted model with a punkier look than fellow British supermodels Kate Moss and Naomi Campbell.

British model Stella Tennant, 50, has died. A statement from her family, as per the BBC, reads: “It is with great sadness we announce the sudden death of Stella Tennant on 22nd December 2020. Stella was a wonderful woman and an inspiration to us all. She will be greatly missed.”

The cause of death has not been announced, but police say there are “no suspicious circumstances.”

Tennant, known for her androgynous look, was a favourite of fashion designers, including the late Karl Lagerfeld, who likened Tennant to Coco Chanel, and made her a face of the French luxury brand in the ’90s. She also appeared in campaigns for Hermes, Burberry and Calvin Klein, among others. As of 2019, she was still walking the runway for brands like Alexander McQueen, Saint Laurent and Valentino haute couture. Stella Tennant walks the runway during the Alexander McQueen runway during Paris Fashion Week Womenswear Fall/Winter 2019/2020 in March 2019. (Photo: Imaxtree)

When she appeared on the December 2018 cover of British Vogue, the magazine noted that “few models have had as sizeable an impact on British fashion [as Tennant].”

The model was a supporter of slow fashion and partnered with Oxfam for Second Hand September, an initiative to draw awareness to the environmental impact of fast fashion. “At my age I think it’s probably quite normal you’re not that interested in consuming, [and not] loving shopping as much as when you’re much younger,” she told The Guardian. “It’s going to take us a long time to change our habits, but I think that this is so obviously a step in the right direction,” she added.

Many in the fashion industry have take to social media to express their grief over the news. “My darling Stella, I fucking love you and will miss you so, so terribly,” wrote British designer Stella McCartney on Instagram. “What sad, horrific news to end this already shocking year! My heart goes out to your stunning family who must be in such undeserving pain. I am speechless… Rest in peace, you inspiring woman. Your soul and inner beauty exceeded the external perfection, Stella. May you ride high above us all on the most perfect horse, eternally in peace.”

“R.I.P kind and wonderful Stella,” said Edward Enninful, editor-in-chief of British Vogue. “My thoughts and prayers are with your family.”