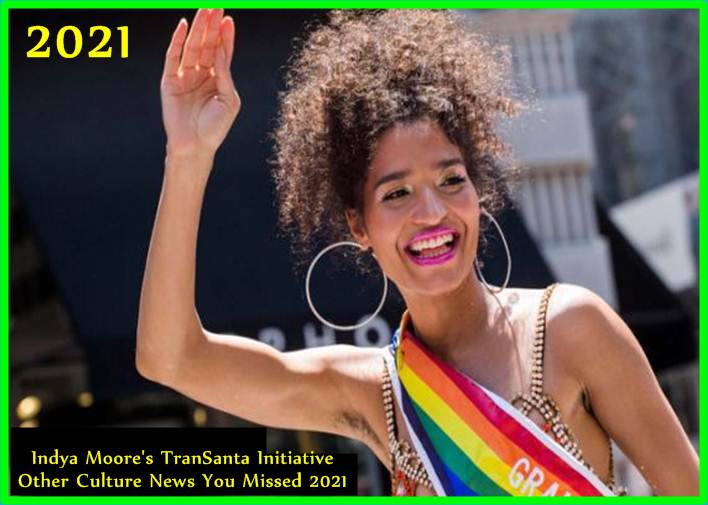 Best Indya Moore launched the TranSanta initiative
Indya Moore, the 25-year-old star of the award-winning television series Pose, just launched an initiative that lets users anonymously gift presents to trans kids and young adults in need. “Trans issues don’t receive much visibility or attention, unfortunately, but this year has been the most violent and deadly for my community,” Moore, who is nonbinary and uses they/them pronouns, wrote on Instagram.

17 Pajamas Stylish Enough for all of Your Virtual Parties 2021

“It has been very upsetting.” Moore launched TranSanta with a group of friends, saying in an Instagram video, “My friends and I want to make sure that trans kids feel like they are a gift to this world because they are. Acceptance and love are gifts we all deserve all year.”

This week, Beyoncé and Jay-Z’s daughter Blue Ivy was nominated for her first (and probably not her last) Grammy. Nominated for her appearance in the music video for Beyoncé’s “Brown Skin Girl,” the eight-year-old is one of the youngest nominees in Grammys history.

When the 2021 Grammy nominations were announced last month, the Recording Academy only listed Beyoncé as the main nominee in the Best Music Video category for that song from her Lion King: The Gift visual album. However, this week the nomination was updated to include both Blue Ivy and WizKid, another featured artist on the track. The 63rd Grammy Awards will take place on January 31, 2021. Tune in then to see if the mother-daughter duo takes home the gold.

Forbes released its annual list of highest-paid celebrities
Kylie Jenner earned $590 million USD this year, landing her the top spot on Forbes’ highest-paid celebrity list for 2020. In second place is her brother-in-law Kanye West, who took home $170 million USD this year. According to Forbes, “West collected most of his ​earnings from his Yeezy sneakers deal with Adidas, while Jenner’s payday came from selling a 51% stake ​in her cosmetics firm to Coty in January.” Canadian actor Ryan Reynolds is number 18 on the list, which also includes people like LeBron James, Ariana Grande and Shawn Mendes (at number 39).

Fitness brand Peloton has had a busy week: they announced the launch of Pilates on their platform and also revealed that they’ve teamed up with Grey’s Anatomy creator Shonda Rhimes on a collaboration.

For the next eight weeks, Peloton and Rhimes are challenging users to say ‘Yes’ to their health, fitness, and wellbeing in 2021 through a series of workouts, conversations, and experiences inspired by the television creator’s ‘Year of Yes’ approach to life. The Peloton X Shonda Rhimes Collaboration: Year of Yes collection of classes will be available via the Bike/Bike+, Tread+, and the Peloton App.

And ICYMI, Prince Harry and Meghan Markle announced that they will be collaborating with Spotify on a series of podcasts under the banner of Archewell Audio.