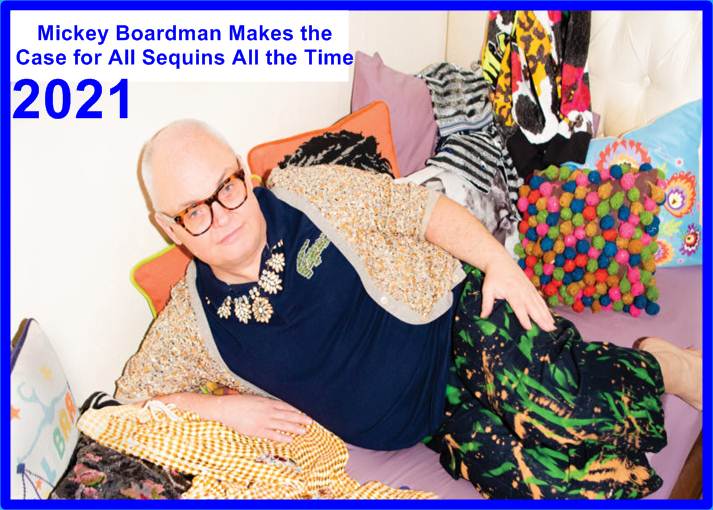 No Comments on Mickey Boardman Makes the Case for All Sequins, All the TimePosted in Lifestyle By Randhir SinghPosted on 31/12/202002/01/2021

Loads of sparkle gives editor Mickey Boardman’s look a lift. “Sequins are great to wear for breakfast, lunch and dinner,” announces Mickey Boardman while sitting cross-legged in his Lower Manhattan apartment. It’s a cozy boîte that explodes with colour and kitsch from every available space, thanks to his predilection for anything rainbow-hued and charmingly retro.

As the editorial director of Paper magazine, where he interned in the early 1990s while still a fashion student at Parsons The New School, Boardman has been a fixture on the international style scene for over two decades. When he was younger, he was the only person he knew who had a Members Only jacket, and he splurged on a pair of Saint Laurent pants.

As he acclimatized to New York’s vivacious nightlife scene, his signature style morphed into “a shell top or ladies’ blouse with some kind of hand-painted print” along with a chandelier necklace and pants that he had cut into clam diggers. The finishing touches were Pearl River Mart flip-flops “and a weird bag,” he says. Mickey Boardman at home in New York.

Today, Boardman is known for ensembles that combine casual items like Lacoste polo shirts (of which he purports to own hundreds) with dazzlingly tactile pieces, primarily of the sequined variety. It’s no surprise that Boardman, who was born in 1966, has a penchant for high-octane glamour. “I loved Bob Mackie, I loved The Carol Burnett Show and I loved Cher,” he says about the early influences on his taste for anything flashy. “I call my aesthetic ‘1960s Supremes in Las Vegas.’”

With its abundance of sequins, bugle beads and crystal-encrusted accoutrements, Boardman’s wardrobe could easily outshine the costume closets of many showgirls. Flashy shoes, cardigans, trousers, necklaces, brooches… If it has bling factor, Boardman will wear it; he owns dozens of embellished pieces by brands like Lanvin, Junya Watanabe, Dries Van Noten, Gucci and H&M’s Conscious.

However, there is one name that appears more than the others in Boardman’s closet. He has a growing stockpile of glittering delights made by London-based designer Ashish Gupta, including a customized match- ing shirt and bomber jacket emblazoned with his nickname, “Mr. Mickey.

” Boardman recalls a show of Gupta’s that he saw during London Fashion Week; it was the designer’s Spring 2015 collection, which contained pieces featuring the faces of Kim Kardashian (before she became Paper’s internet-breaking muse), Kanye West and the members of One Direction – all made with sequins. “My brain was exploding,” he says.

The Sweatsuit Was the Undeniable Fashion It Item of

5 Brands That Prove Artisanal Is The Future of Fashion 2021

Gupta has an unparalleled ability to create intricate and flamboyant designs, drawing influence from his ancestral India as well as pop culture references; his Fall 2017 collection contained pieces emblazoned with meme-able phrases like “More Glitter Less Twitter.” His mishmash of inspirations intrigues Boardman, who is himself a culture enthusiast. Boardman is also what you’d describe as a fierce fan of fashion – the resplendence and individuality of it all. “I worship anyone who’s committed to their look, whether that’s Rick Owens or Lynn Yaeger or Catherine Baba,” he says.

An obsession with the power of style and the persona has been a lifelong one for Boardman. He grew up in the suburbs of Chicago, flicking through fashion magazines while in his preteen years. He fondly recalls his mother’s evening aesthetic in the ’70s, which included a floor-length vest, bell bottoms and platform shoes, and the first two purchases he ever made at Barneys New York: a Missoni sweater and an Emilio Pucci shirt.

(Prior to that, most of his eclectic wardrobe items came from thrift shops.) And he remembers exactly what he wore on the first day of first grade: a pink shirt with monkey heads printed on it and maroon pants featuring a fish motif. Boardman truly relished any opportunity to make a fabulous statement. “When I was four, I asked to be Cinderella for Halloween,” he says.

Despite many of his fledgling fashion dreams being indulged, Boardman has faced challenges in living out his sartorial fantasies because of his weight. He’s a member of WW (formerly Weight Watchers) and works with a personal trainer and does yoga to stay healthy.

One Chicago-based retailer has become his fashion fairy godmother. Ikram Goldman, whose eponymous boutique has become a favorite outpost for those seeking eye-catching designs, has been instrumental in teaching Boardman that with a little tailoring, the world can be his oyster. “She wanted to give me a present around Christmas one year,” says Boardman, but he couldn’t fit into anything in her shop.

After he pointed to a sparkly Proenza Schouler top and lamented that it wouldn’t work for him, Goldman replied, “Oh yeah?” Boardman did a fitting with a tailor Goldman brought in, and panels were added to the sides of the shirt. “It was a shock; it opened things up to me,” says Boardman. “Ikram has ordered extra fabric from Ashish and other designers for me, and she can make anything fit any person.”

The Proenza Schouler top that Boardman acquired from Goldman features prominently in a story that speaks volumes about his status as a style icon. “I was at this glamorous party,” he recalls. “It was an uptown thing – I was shocked I was even invited.” Boardman wore the shirt that night, with his tuxedo, and at one point realized that another guest, actress Liv Tyler, was wearing the same top.

“I prefer women’s clothes because they’re fabulous, not because I want to be a woman or have a gender issue,” he explains. The Tyler sighting made Boardman feel quite chuffed, but one of fashion’s most beloved stars would give him an even bigger boost that evening.

When event and street-style photographer Bill Cunningham noticed Boardman’s ensemble, he immediately asked if he could take Boardman’s picture with another fashionista at the party. “He asked if I had seen Iris Apfel,” says Boardman, “and dragged me around to find her.” Afterward, Cunningham sent Boardman a photocopy of the duo’s picture with a note written on it that couldn’t be more fitting: “This is fashion.”