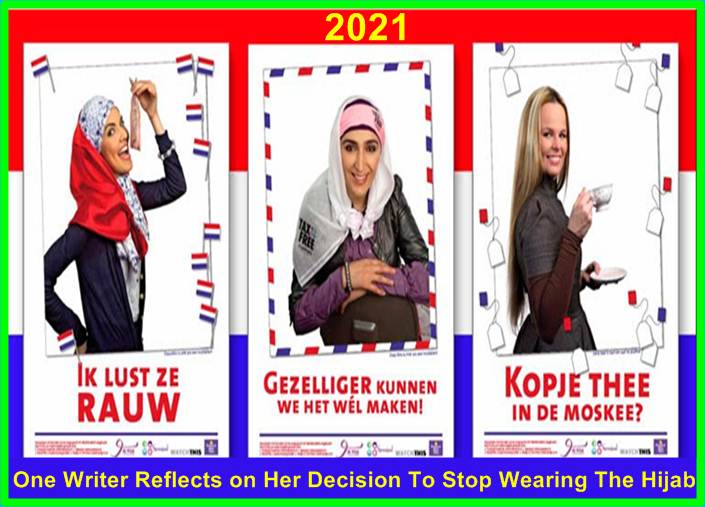 One Writer Reflects on Her Decision To Stop Wearing The Hijab

Urooba Jamal gave up the hijab, as well as her faith, and gained more than just the freedom to play with her hair.

The year I started wearing the hijab – the head scarf some Muslim women wear — was also the year I got braces and glasses. It was the mid-2000s, I was about to enter high school and it was the heyday of melodramatic teenage insecurities, fuelled by cinema classics such as Mean Girls and High School Musical. Unbeknownst to me at 13, I had teetered dramatically away from conventional beauty standards in a time when they were far more nar­rowly defined than they are today.

Soon, however, the hijab would seamlessly fit into my fashion and beauty regimen. In a quest to stand out in the suburbs of Western Canada, in a city where many people were South Asian like me, I found hijabs to match my clothes: in neon hues, bedazzled with sequins and in prints from cheetah to floral. My makeup matched these colours, and I swapped a hair routine for a hijab routine. (Yes, there were bad hijab days.)

About a decade later, at age 22 and in my last semester of university, I decided to stop wearing the physical marker of faith. As if I were a teenager again, I found myself learning things anew, from how to style my hair to how tied my perception of beauty was to the male gaze.

As a hijabi, I fantasized about all of the different hairstyles I wanted to try: wearing French braids, donning extensions and even dyeing my whole head purple. Ironically, the most avant-garde hair decision I’ve made to date is to let a friend bleach the ends of it in their bathtub one summer. Most days I simply wash my hair, haphazardly rub in some curl cream and hold out till I’m confronted with a frizzy pouf.

Despite these fantasies, I found it easy to embrace modest beauty and fashion trends, part of a growing but still novel industry in the mid- to late 2000s. I even started my own fashion blog in high school to document my outfits, which helped me connect with hijabi bloggers from Indonesia to Italy. One day while I was strolling the beach in Vancouver with some other friends who were also wearing hijabs, a woman came up to us. “You all look beautiful in that!” she exclaimed, pointing to our heads. “Just stunning!”

The Right to Wear Headscarves and Other Religious Symbols …2021

While I was basking in the glow of her compliment, one of my friends turned to our group and said worriedly: “See, this is why we shouldn’t even get our eyebrows done! The point of the hijab isn’t to attract attention to our beauty.” I nodded along with the others, confused. I knew that the hijab was worn as an expression of modesty, but what’s the harm in looking good? And what did plucking our eyebrows have to do with anything?

It was then that I began to understand why some people had left comments on my blog that were varia­tions of “Hijab is not a fashion statement!” These were among the first few questions I would have about the hijab and then later about women in Islam and eventually Islam itself – or at least the mainstream Sunni interpretation of it.

As my belief in the religion waned, the hijab began to lose meaning for me. My daily ritual of wrapping fabric around my head began to feel cumbersome – even irritating. I knew I couldn’t continue wearing it. I also knew that there would be repercussions and that I’d never look back.

The first day I stepped out of the house without a hijab, almost six years ago, the winter wind nipped my ears and blew my bangs in my face. I felt like everyone was staring, but of course they weren’t. I had matched my eyeshadow to my blue dress and wore dangly ear­ rings that, for the first time, weren’t peeking out from behind a scarf.

“Unveiling” – from colonial Algeria to present-day Iran – has long been seen as a liberating act to many in the West. Now that I’ve stepped from one world to the next, I’ve taken on new burdens. Becoming agnostic opened up a new world of dating and sex, and I soon became fixated on presenting myself so men would find me attractive.

As I try now, in my late 20s, to feel beautiful without validation from men, while at the same time shedding binary ideas from my Muslim upbringing about modesty and hypersexualization, my style and beauty looks are a combination of my entire past. Sometimes I wear short dresses with plunging necklines; other times I opt for shirts with a looser fit. Sometimes I do a full face of makeup; other times I’ll go bare. One thing hasn’t changed, however: how many different colours you’ll see me sporting at once.

Islamic clothing is clothing that is interpreted as being in accordance with the teachings of Islam. Muslims wear a wide variety of clothing, which is influenced not only by religious considerations, but also practical, cultural, social, and political factors.

In modern times, some Muslims have adopted clothing based on Western traditions, while others wear modern forms of traditional Muslim dress, which over the centuries has typically included long, flowing garments. Besides its practical advantages in the climate of the Middle East, loose-fitting clothing is also generally regarded as conforming to Islamic teachings, which stipulate that body area which are sexual in nature must be hidden from public view.

Traditional dress for Muslim men has typically covered at least the head and the area between the waist and the knees, while traditional women’s dress conceals the hair and the body from the ankles to the neck.[3] Some Muslim women also cover their faces.[1] Islamic dress is influenced by two scriptural sources, the Quran and hadith.

The Quran provides guiding principles believed to have come from God, while the body of hadith describes a human role model through the traditions of the Islamic prophet Muhammad.[4] The branch of the fashion industry influenced by Islamic principles is known as Islamic fashion.

The Arabic word hijab (حجاب) translates into English as “veil”.[5] Adherents of Islam believe that it is a command by God to adult Muslim men and women, carrying the ruling of obligatory, which is agreed upon by consensus.[6][7] In addition, lowering the gaze and guarding one’s chastity stand as vital aspects of wearing the hijab.

The veil re-emerged as a topic of conversation in the 1990s when there was concern regarding potential western infiltration of Muslim practices in Islamic countries.[8] The veil had a new purpose of shielding Muslim women from western influence. Some religious leaders reinforced the principle that an additional purpose of the hijab was to protect the Islamic people and customs.

Rules of hijab for men

According to the Qur’an, both men and women should dress in ways that are halal, meaning permissible, throughout their lives.[9] According to the traditional view in Sunni Islam, men must cover from their belly buttons to their knees, though they differ on whether this includes covering the navel and knees or only what is between them.[10][11][12][13] It is also mentioned in the hadith that it is haram (prohibited) for men to wear clothing articles made of silk or animal skin that has not been tanned.

One Writer Reflects on Her Decision To Stop Wearing The Hijab