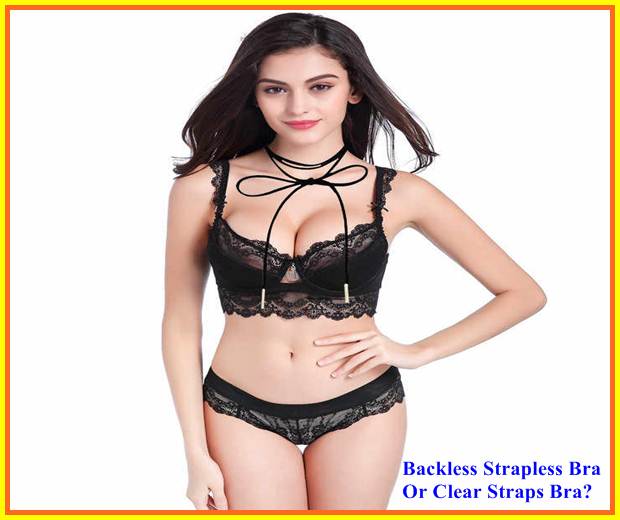 Hiding straps have always been an important aspect of a woman’s clothing strategy. Obviously, the nature of that undergarment is to be concealed under your clothes.

But when comes summertime, you have to look for alternatives if you want to be able to don tank tops, sleeveless shirts, and other fashionable clothes.

Thankfully, the bra industry now provides you with three clear choices – the “invisible-strap” option, the no-strap option, and the backless option.

Certain brands even offer revolutionary backless and strapless bras, which are completely invisible and offer comfort and even push-up effects.

It seems at least at first, like a rather strange concept. It is hard to imagine where the bra will get its support from if it comes neither from vertical straps nor from a horizontal one.

The reality is that a backless strapless bra is a free-standing undergarment that will surprise you (it features the same structure as a regular bra, with wiring and padding).

What sets it apart is the adhesive paste or gel you apply underneath the bust and on the sides in order to provide the necessary support.

The result is a perfect, tight-fitting bra that will allow you to wear any cocktail dress or backless shirt.

Of course, you probably won’t want to use it every day, but it is a solution to many women’s problems. Having one in your drawer could change the way you shop for dresses.

Owning a NuBra is the perfect solution if you are looking for a backless strapless bra.

The Self Adhesive NuBra gives your cleavage a naturally good lift, making you feel confident throughout the day and importantly it does not restrict your body movement in any way.

Otherwise have a look at the NuBra Feather-Lite Bra boasting a 70% lighter weight than the original Silicone NuBra.

The clear-strap bra is a totally different concept that rests on minimizing the visual impact of the straps.

Clear usually means that they are made of transparent plastic, which is obviously not invisible but see-through and definitely much more discrete than any other.

You won’t wear it to give the impression that there is nothing there of course, but in a more informal context, it is a very good alternative to a strapless bra.

It is ideal for a day on the town in hot weather, or if you are going to the beach for example. Most women won’t consider it a stylish must-have, but rather a very convenient and casual garment.

If you are going to wear a bra under a shirt, a clear bra sticking out will either go completely or almost unnoticed.

In a nutshell, a clear-strap bra is an excellent compromise for women looking to bare their shoulders and who don’t want to have to worry about bras sticking out.

The backless strapless bra is very ingenious apparel that will give you great satisfaction if you are looking to wear a cocktail dress or any other backless garment.

The sticky gel might take some getting used to but it also means that you will have no clasp digging into your back. The clear-strap bra, on the other hand, is perfect for long summer days.

They both have different advantages and having one of each in your drawer will make your life much easier.

When the bra was first invented I’m sure that the inventor couldn’t begin to imagine that by the 21st century there would be so many bra types available to purchase that it would become quite confusing.

Bandeau – the bandeau bra consists simply of a band of cloth that goes right around the body over the breast area. The bandeau bra is not designed to provide support or shape, simply coverage. It is a popular form of bikini top.

Balconette – the balconette bra is a 1930’s invention that was designed to lift the breasts to enhance shape. It became popular during the 1950’s.

Bralette – the bralette is a pullover type bra that is usually unlined and unwired. It is normally used by teens as a training bra.

Bullet – the bullet bra is a bra that has cups in the shape of the tip of a bullet. They are usually worn such that the breasts are pushed out perpendicular to the body. The bullet bra is normally associated with outlandish costumes with decorations to enhance shape, such as concentric circles radiating out from the nipples.

Convertible – the convertible bra has detachable straps and bands that can be arranged in different configurations so that the same bra can be worn with different sorts of clothes, such as strapless and backless dresses.

The Perfect Swimsuit For You

Cupless – the cupless bra is designed exactly as it sounds, and has no cups. Usually worn as exotic lingerie, the cupless bra provides very little support, but can sometimes enhance the nipples beneath other garments.

Front Closure – the vast majority of bras have fasteners on the straps worn at the back. As the name suggests, the front closure bra fastens at the front. This has the advantage of making the strap at the back almost flat against the body, making the bra less visible beneath tight fitting clothing.

Full Support – this is the typical kind of bra worn by fuller breasted ladies as every day under garments. They offer maximum support for ultimate comfort throughout the day.

these bras are specially designed to hold in place a breast prosthesis for women who for one reason or another may have lost one or both breasts.

Maternity – maternity bra is a wonderful invention for mothers who are breast feeding their children. The maternity bra’s cups can expand over time to accommodate growing breasts during pregnancy and the cups themselves can be unfastened allowing access to the breast for feeding.

Minimiser – this type of bra is designed for larger women who may want their breasts to appear smaller. The bra compresses and shapes the breast into a more compact shape.

Padded – this is one of the best improvements to the bra since its invention. The padded bra has compartments built into the cups that house cloth or foam pads.

The compartments can be below, around, or over the breast, area to enhance shape in different ways. Where women used to push things inside their bras such as tissue paper or other material in order to give the appearance of a larger breast, with the advent of the padded bra, this was now no longer necessary.

Plunge – the design of this bra, as the name suggests is such that the line plunges down between the breasts meaning that it can be worn with even the lowest of necklines. Because of its shape, the plunge bra, when worn with a low cut dress or t-shirt can enhance the appearance of the breasts.

Posture – again, this is a bra that does what it says in the name. The posture bra is structured in such a way as to help the wearer have a better posture.

Push Up – the push up bra is designed to lift and push together the breasts. This gives the impression of an enhanced cleavage, which again is sometimes desirable when wearing a low cut dress or t-shirt.

The racerback bra has straps that come down the back in a V shape and the straps themselves are therefore much closer to the neck than traditional bras.

The advantage is that the straps will not show when wearing sleeveless tops and dresses. The racerback design is also popular for sports bras as the placement of the straps provides more support meaningless bounce when running for example.

Sheer- this type of bra is made from fabric which is translucent and therefore allows the breast to be seen through the bra.

Shelf – the shelf bra again does what it says by having a rigid band which fits under the bra thereby pushing the breasts upwards. They also only have half cups so the nipple and most of the breast area is exposed and therefore gives the impression that the breasts have been placed on a shelf.

Softcup – the softcup bra has no underwiring or other type of rigidity to it. It simply relies on the strength of the material itself to support the breasts.

Sports – the sports bra is specially designed for active women and provides maximum support for the breasts to prevent them from bouncing during exercise, which can be painful, especially for larger breasted women.

Strapless – this type of bra has no shoulder straps and so is particularly useful when wearing clothing that reveals the shoulders of the wearer.

T-Shirt – the idea of the t-shirt bra is that it has no raised seems hand tend to have fasteners that do not cause the straps to be raised which means they can be almost invisible when worn beneath a t-shirt or other tight fitting item of clothing. T-shirt bras will also sometimes have a small amount of padding in order to prevent the shape of the nipple from being seen.

Training – these bras are designed for girls who are starting to develop breasts. They offer little or no support and are really only designed to allow girls to get used to wearing a bra.

Underwire – an underwire bra has a metal or plastic band or wire running within the fabric underneath the breasts. This allows the bra to give much more support to the breasts than relying on just the fabric itself.

Water and Gel Bras – this design of the bra is essentially an evolution of the push-up bra in that it has compartments in the bra cups that contain padding, but rather than the padding is made from cotton or other material as in the push-up bra, the compartments have pads that are filled with silicone or water.

Because this substance is less rigid it allows the breast to move around more freely so that the breast is enhanced but remains more natural-looking.